A note from the ethnographer’s note book in Kansas City, written in 2004. 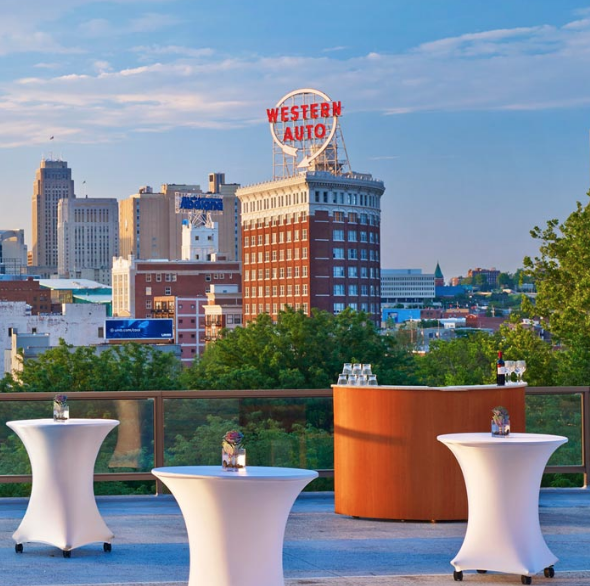 1.  First thing this morning in the hotel lobby, I am standing beside a little girl and her mom.  The mom looks exhausted by life and, to judge by appearances, she was not the brightest spark to begin with.  Her little girl, about 9, is staring out a window.

“At night, when it’s lit up, two letters are missing.”

“What do you know?” I think to myself, “one of the smart ones.”

I felt I should reward this splendid little observation.

The little girl beams and rocks up on her toes with pleasure: finally someone gets what she gets.

2.  Later in the day, I go to interview a man who is 50-something and living in a suburban home.  He is cautious, articulate, smart, and not very forthcoming.  We sit at his dining room table.  The chairs are elaborately carved and upholstered in faux leopard skin.  There is a very large curio beside us filled with old fashioned glass wear.  Behind me is an immense African mask of great sculptural authority.  Virtually all the art is ancient Egyptian in theme, the sort of thing we have from Pharaoh’s tombs.  Behind the couch in the living room is a set of golf clubs.

3.  Still later in the day, I go to another interview.  My taxi driver is suspicious of the neighborhood and the house before us. It is immense with a vast stone foundation and 3 stories of badly painted wood, the architecture originally stolid but grand.  A hundred years of neglect has put paid to the grandeur. The place now has an embarrassed air of a gentleman who catches you catching him in diminished circumstances.  This place has “urban decay” written all over it.

The cabbie says, “I’m going to wait here till they open the door.  Come back if you want.  Run if you have to.”

I climb the stairs.  The big door opens as if the Munsters have been expecting me.  Standing there was a woman dressed entirely, head to toe, in white.  On her head is a kind of turban and in the middle of the turban was a badge of some kind.  I do not run down the stairs, but for a moment I wrestle with the idea that this might be a tremendously good idea.

“Come in,” she says without smiling.  As the door closes, I hear the taxi pull away.

I take these data points as proof that America is the greatest country on the face of the earth.

The suburban dweller is an African American man who accepts and now lives the Black Athena argument.  Some of us in the academy are inclined to mock this argument as identity construction of the most revisionist and community aggrandizing kind.  But I am sure you would not want to tell my respondent this, not because he is a tough guy, though he looks like a pretty tough guy, but because he is fully formed and fully credible and not by any stretch of the imagination a mere visitor at the all-you-can-eat smörgåsbord of American spirituality.  This guy lives Black Athena.  It works for him.  It makes this world make sense.  See what you will about the book.  This is the life.

The women in white proves to be, and this was of course my first guess, a classical yoga devotee with an MBA in accounting.  This big house is a place that she teaches spiritual development and her husband practices an alternative medicine.  She proves to be lucid, calm, interesting and quietly revelational.

Both these people have put down roots in ideas that were, 20 years ago, so fringe, at least in America, they did not give real purchase.  You could not live them.  Twenty years later, Black Athena and classical yoga are habitable worlds, fully realized, fully scripted, fully furnished and capacious; mobile homes, perhaps, but homes all the same.

This is an America culture that is first extensive, adding new cultural space, and then intensive, working this space till people can actually live there.  At first, the space is so new and untried, it sustains only pioneers.  But in a very short time (and this is in ethnographic scheme of things, time-lapse rapidity) the space attracts and sustains settlers.  And eventually, the space sustains people who can’t imagine living any other way; it is now a fully formed world unto itself.  People in Kansas may not get my haircut (see last post) but that’s because some of them are busy with innovations of their own.

The little girl.  She’s the wild card, isn’t she?  There’s a good chance that she goes to a school so bad that there is no system in place to spot, engage, and advance her talent.  Kids half as smart will get twice the resources.  She will always be smarter than her mom and smarter than the worst of her biographical alternatives.  But that’s not good enough, is it?  And here America very suddenly ceases to look like the greatest country on the face of the earth.